It is the continuation of the Grand Circle travel note, the third day.
After a magnificent drive of Scenic Byway 12, I arrived at Moab, the base of the  Arches National Park.


Grand Circle trip Day3-2 a magnificent Road Trip "Scenic Byway 12"
It was already evening at the time of arrival, but we decided to enter Archies NP for a while.

Arches National Park is not only a rocky arch but also a treasure trove of natural shaping. The interior of the park is vast, but the roads are maintained, so you can go around with a variety of view spots and trails by private car.

This is the area called “Park Avenue”. 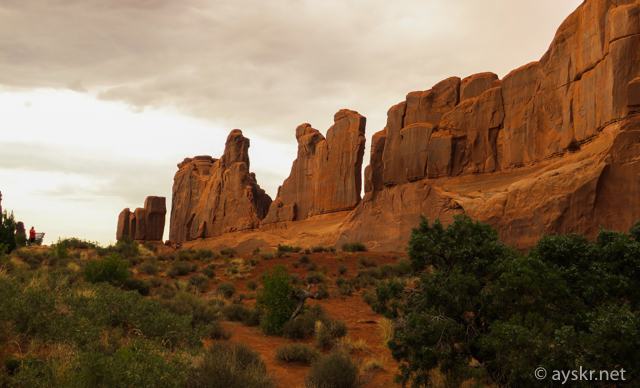 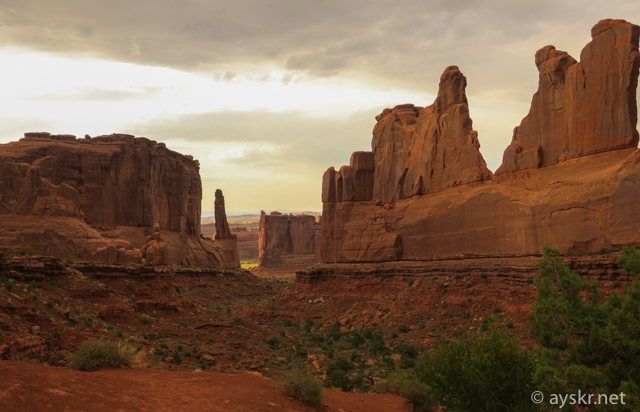 It seems that it is surrounded by the Manhattan building group as its name suggests. 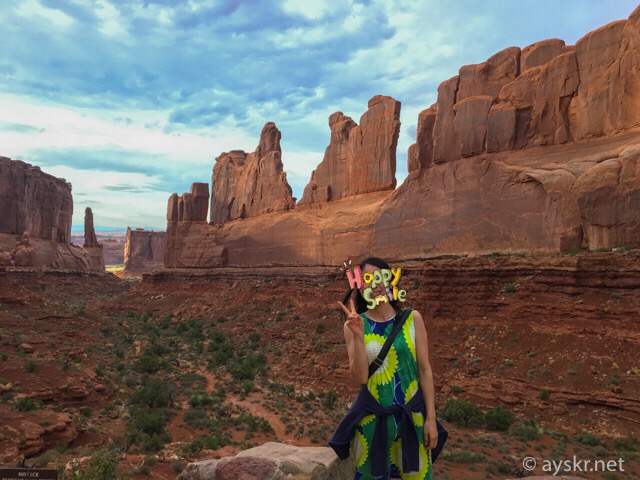 Do you Know?  The lower right of this photo here,  the rock called Queen Nefertiti . 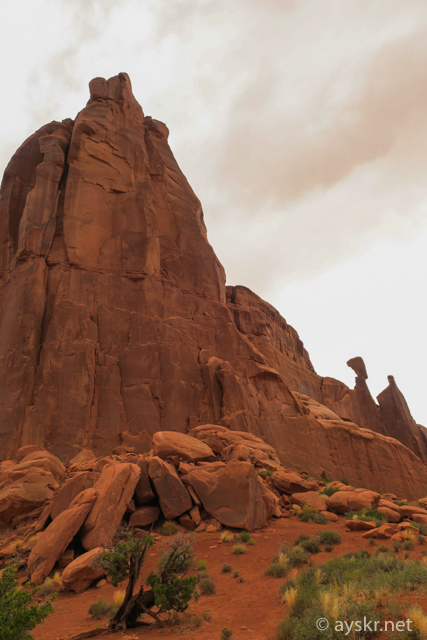 It looks exactly like one of the queen of Queen of Egypt BC . 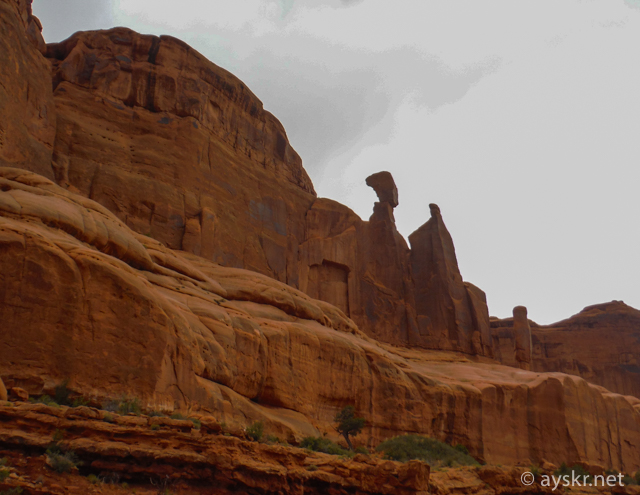 Go ahead ahead of Park Avenue to the area called Courthouse Towers. Strange rocks are concentrated. This is Three Gossips. Three girls seem to be doing a wild story (?). Even if you say a girl, it is very powerful as it is 100 meters tall. 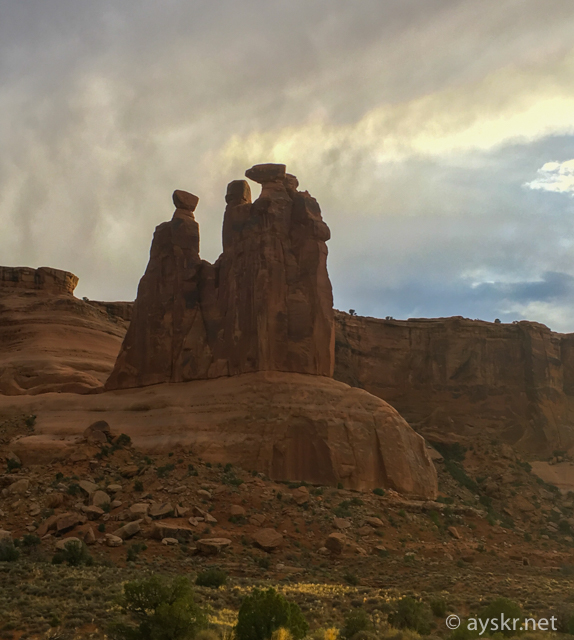 Its name is  rock called” the Organ “.  It’s too big to fit far enough in the picture … 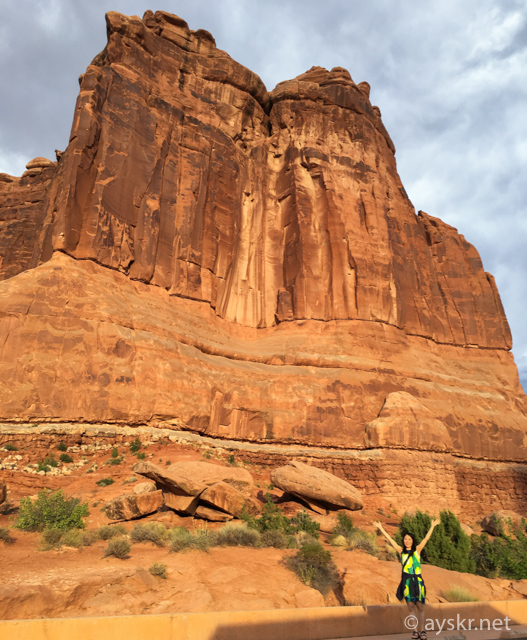 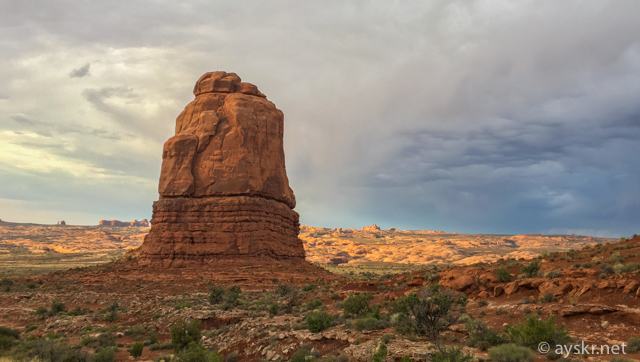 It looked like a whale when seen from the side. 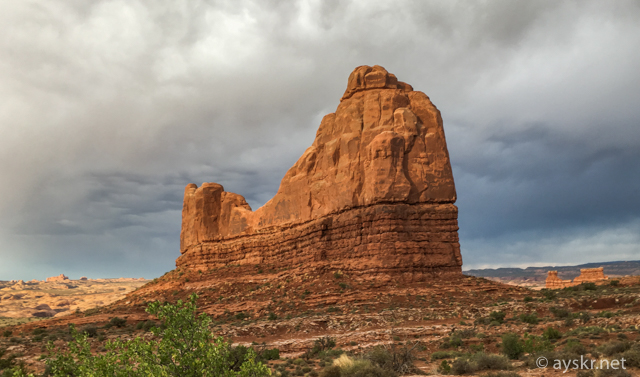 There are lots of unnamed strange rocks and we can not quite go forward. 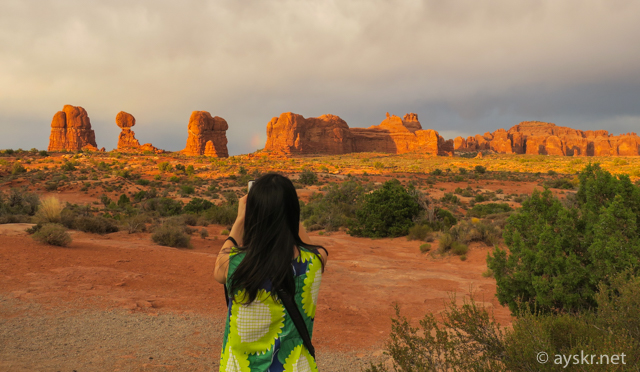 A rock like egg in the far left is called “Balanced Rock”. Both sides are like a cat foot ,,,

The sunset hits and it is burning red. it’s beautiful. 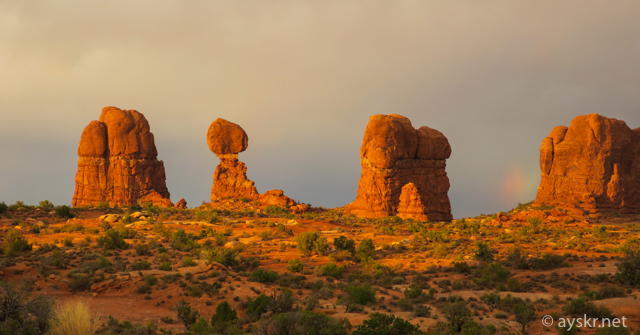 Change the angle and look at the balanced lock. It is exquisitely balanced. 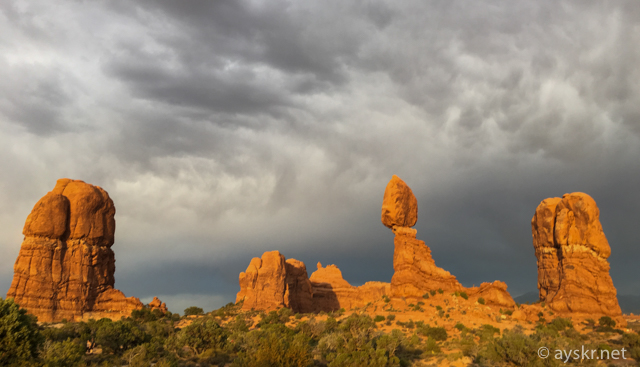 Compared with the person walking the trail at the feet of balanced rocks, I can understand its size well. 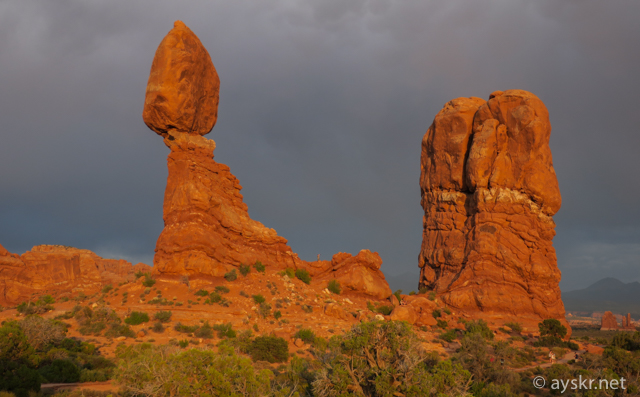 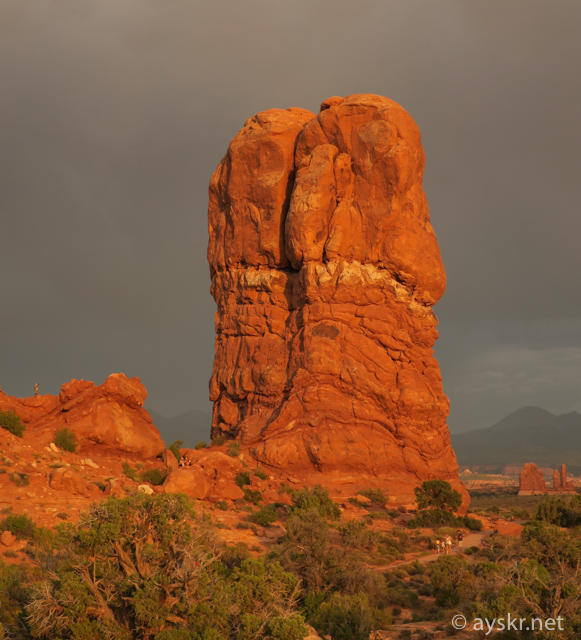 Commemorative photo at the viewpoint. 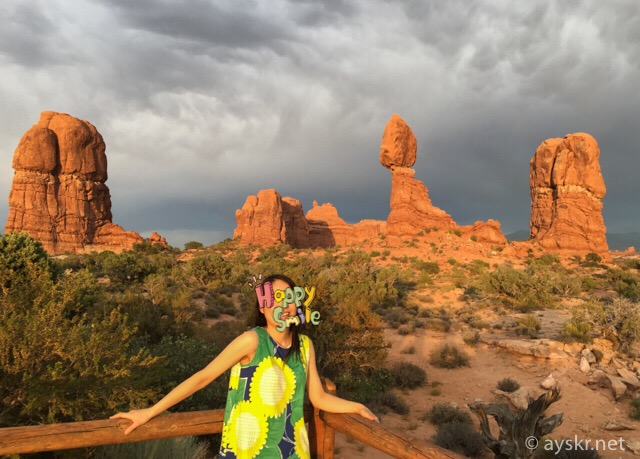 On the way to the next section, there was a rainbow. 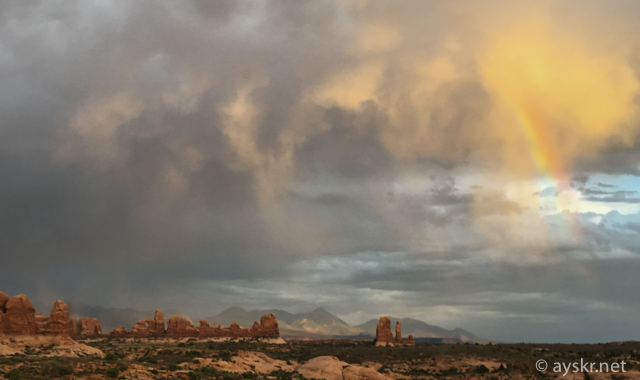 A rainbow to the clear air of Archies NP, and evening glow. It’s  a luxurious sight. 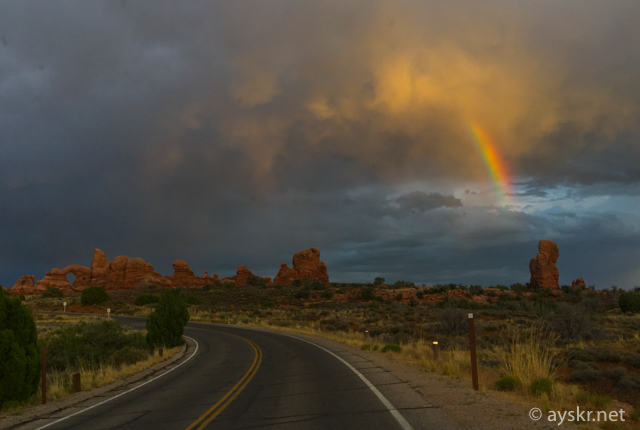 Sunset over the rocky rocks

I came to the Windows section that branched to the right from the Balanced lock viewpoint. Because the sunset was coming, I could not walk the trail, but it is a huge window even if I look at it far. (It seems to call vertically long hole “window”) 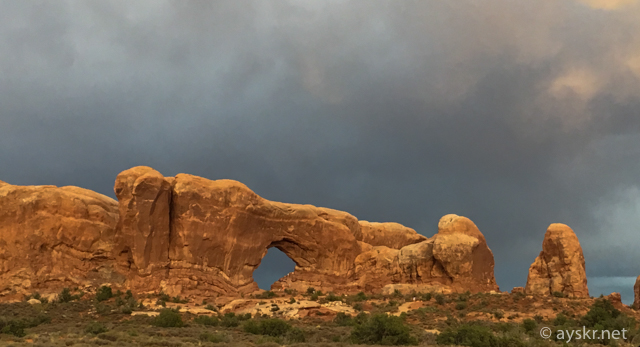 This area is called Cave of Coves. 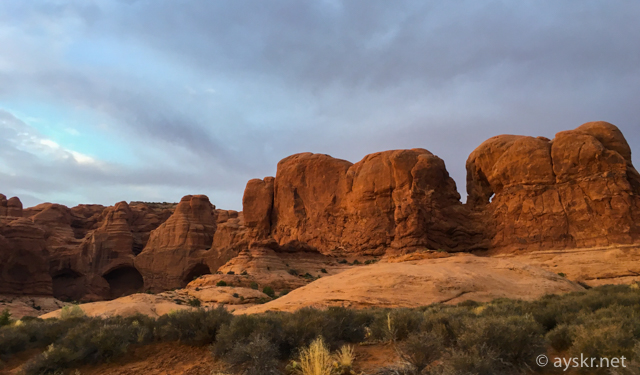 The sunset reached where we came. Today ‘s walk will end with a sunset view. 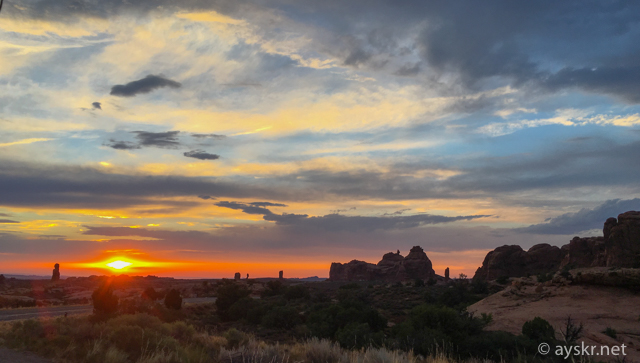 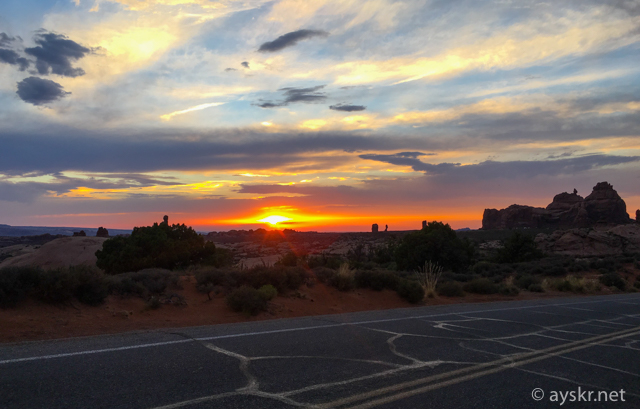 The sunset through Balanced rock with varying angle. It is a strange and beautiful landscape. 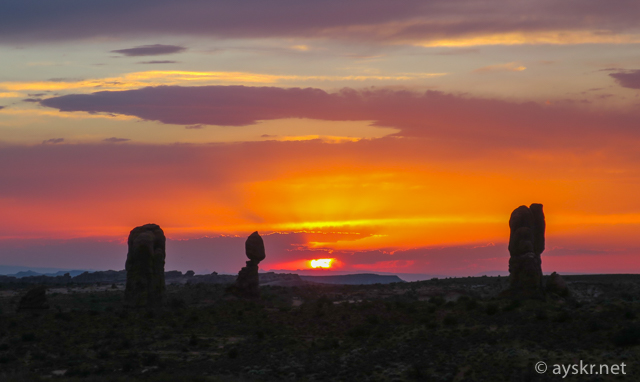 Today had full programs.  It started from the sunrise of Bryce Canyon,  6 hours of spectacular drive , and Arches sunset!


Grand Circle Trip Day3-1 Canyon of Beautiful spires - Bryce Canyon
Grand Circle trip Day3-2 a magnificent Road Trip "Scenic Byway 12"
We returned to Moab and launched it at Moab Brewery in the vicinity of today’s lodging Moab valley INN . It is a restaurante where you can enjoy various kinds of Moab local beer and meals. It was lively late at night.

I thought that, “Let’s eat a salad because vegetables are missing!” But  it was a lot of meat. 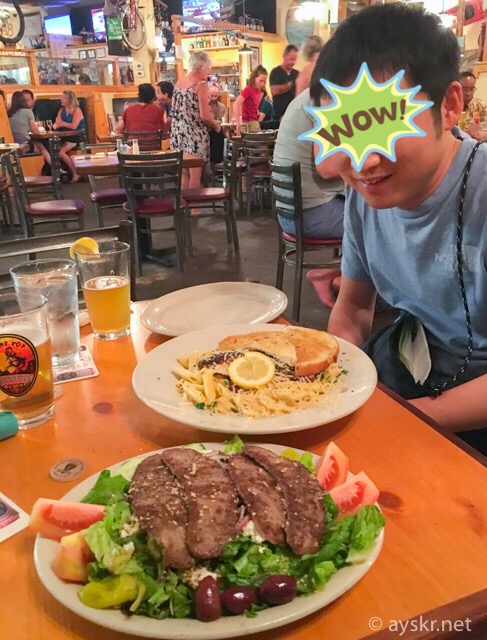 After that cream pasta. Somehow garlic toast is on …. I am concerned about calories, but it is delicious. 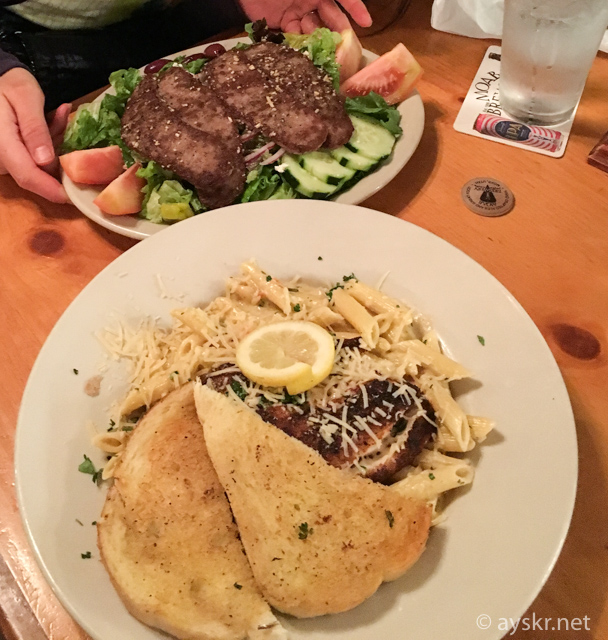 This is the end of the Grand Circle Trip Day 3. It was plenty events.

Arches National Park is vast and has many sights. I want to spend a lot of time using the car and looking around.

I will return to Archies again early morning tomorrow. I will aim for the Delicate Arch, it’s a symbol of Utah!

This time we stayed at Mab Valley Inn. Although it was far from the entrance of Archie’s National Park in the city of Moab, Archies was vast and people basically move by  private cars so it did not become a problem much. I think the biggest advantage of this hotel is closer to Moab Brewery , that’s why I do not care muchwith the location relationship between the inn and the national park. The important thing is whether there is restaurantes inear hotel.

This site uses Akismet to reduce spam. Learn how your comment data is processed.